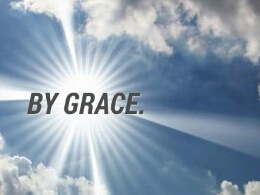 By Grace: A Brief Study on God’s Grace, with Scripture References

The word grace is referred to in some bible texts as favor, as well as loving kindness and thanks. Grace is a gift, and by it, scripture identifies what this gift has freely given us. Grace has come through and by Jesus Christ, wherein there was no longer an inherited salvation through works, which was of the Old Testament. No more would man need to make sacrifice, or work to obtain favor with God. Rather, salvation was the gift granted to all true believers in the final sacrifice of Jesus. The foreordained gift was predestined through Divine Grace.

Through grace, we have been:

Chosen as children of Christ:

Rom 11:5-6 So too at the present time there is a remnant, chosen by grace.

Rom 11:6 But if it is by grace, it is no longer on the basis of works; otherwise grace would no longer be grace.

Justified : We are made and declared as righteous ones of God.

Romans 3:24 and are justified by his grace as a gift, through the redemption that is in Christ Jesus

Tit 3:7 so that being justified by his grace we might become heirs according to the hope of eternal life.

Strengthened A gift given to those who have been chosen to love and have faith in the Lord.

Heb 13:9 Do not be led away by diverse and strange teachings, for it is good for the heart to be strengthened by grace, not by foods, which have not benefited those devoted to them.

Ability of Obedience: We are able to obey God through the gift of His grace, which comes with understanding of His final sacrifice. Through obedience, which is granted to us through the Holy Spirit, we are blessed with the title of righteous Christians.

Romans 6:15-18 What then? Are we to sin because we are not under law but under grace? By no means! Do you not know that if you present yourselves to anyone as obedient slaves, you are slaves of the one whom you obey, either of sin, which leads to death, or of obedience, which leads to righteousness? But thanks be to God, that you who were once slaves of sin have become obedient from the heart to the standard of teaching to which you were committed, and, having been set free from sin, have become slaves of righteousness.

Teach others: The Apostle Paul was granted grace which provided him with the ability to instruct those who needed correction in a loving manner, and minister the message of Jesus.

Rom 12:3 For by the grace given to me I say to everyone among you not to think of himself more highly than he ought to think, but to think with sober judgment, each according to the measure of faith that God has assigned.

But on some points I have written to you very boldly by way of reminder, because of the grace given me by God

Eph 3:7 Of this gospel I was made a minister according to the gift of God’s grace, which was given me by the working of his power.

Endurance and perseverance: Followers of Christ are given the ability to work hard in the ministry. This work does not help a Christian “get to heaven”, but rather it is just one of the characteristic traits of a follower of God who is called to do His work.

1 Corinthians 15:10 But by the grace of God I am what I am, and his grace toward me was not in vain. On the contrary, I worked harder than any of them, though it was not I, but the grace of God that is with me.

2Co 8:19 And not only that, but he has been appointed by the churches to travel with us as we carry out this act of grace that is being ministered by us, for the glory of the Lord himself and to show our good will.

Saved: a sinner is saved from spiritual death and given life in Christ, affording them a pass of forgiveness, and worthiness in the eyes of the Lord. They receive salvation by grace.

Eph 2:5 even when we were dead in our trespasses, made us alive together with Christ—by grace you have been saved—

Eph 2:8 For by grace you have been saved through faith. And this is not your own doing; it is the gift of God

We are called to Christ by His grace. After we are set apart as a follower of Christ before we are born, the Father calls us to Him in order to complete His work. This is not of our own choosing, but rather by the gift that Christ has given to us while we are in our mother’s womb.

Galations 1:15-16 But when he who had set me apart before I was born, and who called me by his grace, was pleased to reveal his Son to me, in order that I might preach him among the Gentiles, I did not immediately consult with anyone

Can grace be made to react? The scripture likens grace to God Himself, as the grantor. When one offends the Holy Spirit, grace itself becomes outraged, or insulted.

Heb 10:29 How much worse punishment, do you think, will be deserved by the one who has trampled underfoot the Son of God, and has profaned the blood of the covenant by which he was sanctified, and has outraged the Spirit of grace?

By grace we are chosen.

By grace, we are set apart, or sanctified, as followers of Christ, even before being able to speak yet.

We are called to Christ by the inherited gift of His grace.

By grace, we realize our salvation.

By grace, we are able to minister God’s word.

By grace we are given perseverance and strength.

By grace, we are brought from spiritual death to spiritual life; ultimately and finally saved and regenerated in Christ. We are awarded our position with Christ, as long as we endure to the end. By grace we are saved.

You are welcomed and encouraged to take some time to do a bit further study on some of these important doctrinal principals. Please review: