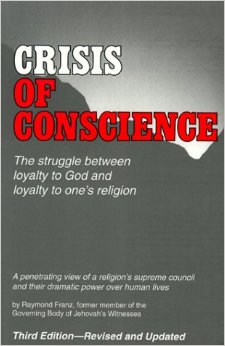 Ray Franz is known as the legendary activist who spoke against the Watchtower Bible and Tract Society in New York. Raymond Franz’s book, Crisis of Conscience has been the single most damaging book to the Jehovah’s Witness religion in history. The late Franz is responsible for tens of thousands of Jehovah’s Witnesses being alerted to what really went on inside the Watchtower when he was a Governing Body member. Crisis of Conscience is a riveting page turner which leaves nothing to the imagination. Franz revealed his experiences which will forever give him the name of Ex Jehovah’s Witness “activist of all time”.

A former Jehovah’s Witness announced that he had multiple copies of Crisis of Conscience reprinted, which were readily available for his Youtube viewers to “win”. His contest demanded that all must subscribe to his YouTube channel in order to have a chance at winning a copy of the boom. The bootlegs sported his website address printed on the back cover. Allegedly they were reprinted by a Romanian man who had the pirated copies illegally shipped to the activist in Croatia. Former Jehovah’s Witnesses questioned his motives. In response, he shifted the blame on the printer. The printer claimed that the activist knew about the website mention on the book, and seemed unconcerned with the multiple allegations of illegal copyright infringement.

The man who boasted of recreating copies said that the copyright owner didn’t object, and therefore he saw nothing wrong with making bootlegs. He claimed that those who objected to his printed logo on pirated copies of Ray Franz’s book were “just jealous” of his high amount of subscribers, and likely were just evangelical Christians who objected to his atheism. Shortly thereafter, many atheists also began to vocalize their disgust toward the activist who not only “disrespected Franz’s work” but has also become rather “barbaric” in his treatment of anyone who questions or objects to anything that he says.

The Battle Turns to a Blaze

As of December, 2015, the copyrights to Crisis of Conscience have been publicly claimed by Raymond Franz’s sister in law, Deborah Dykstra. Dykstra was informed of the acts of those who made bootleg copies, and sought out to retain her legal rights. Within the matter of just a week or so, Deborah Dykstra made a public statement, which was conveyed to the community of ExJWs by activists Marc and Cora Latham.

Official Announcement that Criminals Will Be Prosecuted: December 2015

The word is out. Any and all persons who violate the copyrights of Crisis of Conscience may be pursued legally, fined and possibly imprisoned. Reproduction, reprinting, PDF distribution, and recordings may be considered copyright infringement. Ms. Dykstra has retained attorneys who have assisted her in protecting the rights to the legendary book. A letter has been drafted, and announcement made on the Latham’s YouTube channel.

Donations Being Accepted by Copyright Holder

Further, ex Jehovah’s Witnesses are requested and encouraged to provide assistance by donating to the work of Ms. Deborah Dykstra, who plans to reprint the books in the near future. Any and all donations may be sent via Paypal to the email address shown in the official letter released by Ms. Dykstra. ExJWs seem to be jumping on board, in full support of the book’s legal reprinting. This will allow the legacy of Mr. Raymond Franz to continue, as thousands more people are made aware of the Watchtower’s dirty secrets, which are contained in the book.

Follow the updates and see the official written Cease and Desist statement made by the copyright holder on CommentaryPress.com

Here is the video announcement made on December 17, 2015. The video includes a reading of Ms. Dykstra’s letter regarding bootleg copies, as well as plans to protect her copyrights, and reprint the book in the future.