Jehovah Does NOT Mean God of Mischief, Ruin

Does “Jehovah” Mean God of Mischief,  Ruin, or Destruction?

A critical look at the forms of the name of God: YHWH, JEHOVAH, & MORE.

Jehovah is translated as “The Existing One” or “Lord.” The meaning of “Jehovah” comes from the Hebrew word, “Havah” meaning, “to be” or “to exist.” It may also be “to become” or specifically “to become known”.

Strong’s Number H3068 matches the Hebrew יְהֹוָה (Yĕhovah), which occurs 6,519 times in 5,521 verses in the Hebrew concordance of the KJV.

The oldest manuscripts of the Hebrew Old Testament do not show vowels, but rather show, “YHWH”. The Masorites added vowels from “Adonai” to preserve the sacred name of God, as YHWH (Hebrew: “my lord”) wasn’t to be spoken. The result as we know it, has become Yahweh. One Hebrew variant spelling of God’s name is Yehowah, derived from the Tetragrammaton YHWH, or YAHWEH.

There are many Hebrew names that begin with the sounds of the first few letters of Yehowah. All of the names phonetically start with two syllables that are read “Yeh-ho”. In English, the “Y” is pronounced as “J”. Just a few examples are:

Raymundus Martini’s Usage of a Rendition of “Jehovah”

The early Masorites translated the ancient Hebrew text into the “Masoretic text”, including adding vowels to Hebrew letters. This became a source that is seen in many commentaries of theologians, even until today. You might see the Masoretic text referred to in footnotes as “MT” or “M-text”.

In 1278, a translator named Ramon Martin, (or Raymundus Martini) a Spanish monk of the Dominican Order, wrote “Pugio Fidei“. This work is said by many to have been the first work that contained the spelling, “Jehovah“.

Joseph Voison was an editor of Martini’s “Pugio Fidei” in 1651; over 400 years after the original. Voisin had said that he found the name “Jehova” (written “yehova” and “yohova”) used in 3 of the 4 manuscripts of Pugio. Scholar George F. Moore noted the testimony of Joseph Voisin. However, Moore asserted that Martini was not the first to use the variation “Jehova”, but that this spelling was written later in the 14th century by other reproductions/copyists of Pugio Fidei.  George Moore’s work can be read here.

Earlier Variations, Prior to Raymundus Martini

It is also said that studies of the Greek Magical Papyri of Egypt reveal the usage in variations even before Pugio Fidei was written, dating back to approximately 1100.  C. Leemans, C. Wessely, A. Dieterich, and F.C. Kenyon all had commentaries that mentioned usage in the Greek Magical Papyri, which showed various combinations of the letters, “iaou”. While I am not one to study such things as the Magical Papyri, it is worth noting that those who have studied them discuss the variations of the name of God found in these ancient writings. This suggests that usages of the name were already adapted to in the times prior to Raymundus Martini. None, however, used the exact spelling, “Jehovah”. My first finding is by Martin Luther, who added the “h” on the end.

A Theory of the Meaning “Jehovah”

There is a theory that suggests that a variation of the name “Jehovah” is composed of the abbreviated forms of the imperfect, the participle, and the perfect of the Hebrew verb “to be” (ye=yehi; ho=howeh; wa=hawah). The meaning of Jehovah would be “he who will be, is, and has been”. This theory is based on Rev 1:4-5 and Rev 1:8 (note in these scriptures that God: is, was, and is to come). However, experts do not all agree on this possibility.

Culprits Turn “God” into “evil” (The Loaf of Bread Illustration)

Let’s call this my “loaf of bread” theory, for lack of a better illustration. Many former Jehovah’s Witnesses, as well as others who are either fooled by others or who denounce the name, suggest that the name of God Jehovah means “god of ruin”, or “god of destruction”. They take to this by watching others lay out the word “Jehovah” like a loaf of bread, and slicing it up into parts. They then attempt to butter the bread and flavor it. Essentially, they redefine the parts slice by slice. They turn a word that was already previously translated from Hebrew to English, and double or triple translate it into “buttered pieces” of English, and then mash it all together and call it a conclusive meaning. This does not work. The name has already been translated. Hebrew language “rules” must be taken into consideration to properly translate certain words or names. Masoretic vowel points are even critical to understand.

For example, the Masorites added the mappiq to the letters “jah” in order to remind the readers to say “Lord” (Adonai) instead of “Jah“. (See photo below) Their intentions were to prevent those in synagogues from saying God’s name. In addition, many names that ended in “yah” were translated “iah“, which some believe was also done by the Masorites out of fear of people speaking the holy name of God out loud. 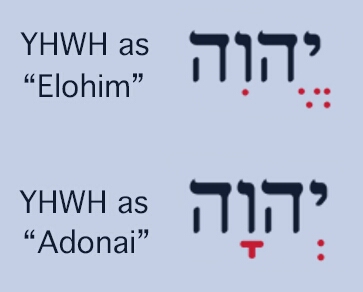 “Jewah” and “Jehouah” were also written forms adapted and accepted through the ages. Christian theologians began to make the pronunciation or spelling as “Jehovah“, choosing to disregard or dismiss the Masoretic translations of the word. Further, some scholars prefer the pronunciation “Jehwah” over the name “Yahweh”, feeling that it is seen in the most reliable translations, including the Masoretic MSS, versions of the LXX (Septuagint) and the Samaritan Pentateuch. Still, the topic of translations is disputed, as it probably always will be.

“Vocalizations of a Hebrew word would change according to the consonantal root.” -W. Vischer

With the intricacies of the languages and tedious translations involved, it is beyond ludicrous for anyone to chop apart the name “Jehovah” and convert it to a meaning such as “God of ruin”. In fact, most language experts would find this uneducated, unscholarly nonsense as borderline ludicrous.

It should also be noted that there is a Guyanese woman who demands that “Jehovah” means “god of ruin”. She dedicates her website to this assertion,  as well as her alleged desire to “unite Israelites”. Her website reveals horrendous English, including grammar, punctuation and spelling. If one does not recognize the difference between “there” and “they’re”, and repeatedly capitalizes the word “history”, then credibility is that of a novice, at best. One might also deduce that repeatedly yelling to readers by using multiple exclamation points denotes poor judgement and suggests lack of basic intellectual written communication.

Those who parrot these type of people also show their dangerous susceptibility to believe just about anything they read. In addition, the woman I refer to also states that one cannot “put yah in front of God’s name”. She calls herself a Hebrew, and believes Jesus Christ is “Ba’al”. Enough said on that.

God’s Name Mocked by Many

Please use caution when repeating what you hear or read. Many have lashed out in anger, believing that “Jehovah means evil”. Do you see what has just happened? One thinks they’re stating irrefutable fact, and begins telling the world, “Jehovah is evil… Jehovah is Satan”. Some even profess to be Christians, and spout off this unfounded jargon. Through a simple smokescreen, many self professed Christians are blaspheming in an effort to prove a religion wrong, as some sort of “dirt” they’ve uncovered. Many former JWs have fallen into the trap of saying “their God” (when referring to Jehovah’s Witnesses) and including abusive speech directly against God, possibly without even realizing it. Hence, the Jehovah’s Witnesses may in turn have grounds to view most of these people as unbelievers in God, or atheists, or even blasphemers. This may give Jehovah’s Witnesses more “ammunition” against former JWs and others, who already have a reputation and stereotype of being “tricked” by alleged “false information”, and led by Satan.

It is highly important then, that Christians and even non-Christians use extra caution in spreading false information that has no intellectual basis whatsoever.

Ads Note: Random ads are placed on this website by Google. The author of this website does not choose or necessarily endorse the ads you may be seeing. Please disregard any ads that are not to your preferences.