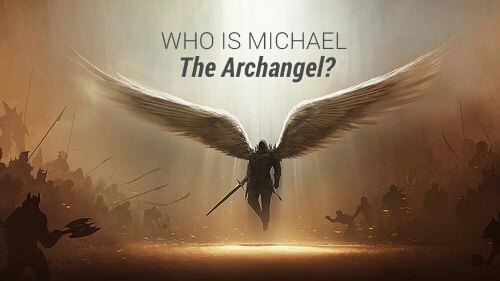 Who Is Michael the Archangel? Is it Jesus?

Disclaimer: This writing is in no way meant to lead you into one direction or another on the matter, nor to instruct you to change your views. It should be used only as a resource to assist you in areas of further study on the topic of Michael the archangel.

Daniel 8:25 “And through his policy also he shall cause craft to prosper in his hand; and he shall magnify himself in his heart, and by peace shall destroy many: he shall also stand up against the Prince of princes; but he shall be broken without hand.”

Michael the archangel is spoken of in the following texts:

Daniel 10:10-21 A message was revealed to Daniel. He had a vision of a man (Daniel 10:5-6) who had an appearance of glory. This angel spoke to Daniel, acknowledging Daniel’s willingness to “humble yourself before your God”. The angel said, “your words were heard and I have come because of your words”. (v. 12) He spoke of the prince of the Kingdom of Persia, who was a powerful, evil being. Michael is said to have come and assisted the angel. Daniel fell quiet, and “one having the likeness of the sons of man” touched his lips. He began to speak to the one who stood before him, and referred to him as “Lord”. The same one said that he must return and fight with the prince of Persia. The being then referred to Michael as, “your Prince”. He continues to explain what will happen in the latter days.

Jude 1:9-10 Michael rebukes the devil, saying “the Lord rebuke you”. This is regarding his dispute with the devil over possession of the body of Moses. This is quite possibly based on the Apocryphal Jewish work, “The assumption of Moses” (which expands on Deut 34:5-6)

Revelation 12:7 Michael the archangel fights the dragon (Satan) and it is implied that Michael is the one who expels satan and his angels to the earth.

Argument: “Jesus cannot be an angel.”

Please read the following scripture carefully. For it’s complete context, refer to your bible for a chapter reading.

Joshua 5:13-15
When Joshua was by Jericho, he lifted up his eyes and looked, and behold, a man was standing before him with his drawn sword in his hand. And Joshua went to him and said to him, “Are you for us, or for our adversaries?” 14 And he said, “No; but I am the commander of the army of the LORD. Now I have come.” And Joshua fell on his face to the earth and worshiped and said to him, “What does my lord say to his servant?” 15 And the commander of the LORD’s army said to Joshua, “Take off your sandals from your feet, for the place where you are standing is holy.” And Joshua did so. (ESV)

It is worth noting that the angels reject being worshipped in Rev. 19:9-10. One then wonders how it is so that Joshua worshipped an Angel without rebuke for his act, while referring to the ground beneath Joshua’s feet as “holy”. Joshua saw the angel’s face. The Angel represented a Being of Holiness. The scripture does not say directly that Joshua was face to face with God. The angel is known as the Commander of the army of the Lord. That very Commander was worshipped. Taking into consideration that no standard angel shall be worshipped, the Angel of the Lord, Commander of the Lord’s army, ordered Joshua to take of His shoes in the presence of holiness. He was then worshipped by Joshua. An Angel was worshipped. Was it Jesus?

I find a very big difference to say that :
1) Michael the archangel could have been the name given to the Almighty Jesus, and
2) Jesus was just a created angel named Michael.

Having a closer look at the words does show a vast difference. To suggest that Michael the archangel could be a portrayal of Jesus is not the same as saying Jesus Christ is an angel named Michael. It was said that the Son of God, prior to his birth, would arrive, and He would be called “Emmanuel”, meaning “God with us“.  “Michael” translates to the question, “Who is like God?” (Hebrew).

Study Topic: Who Shall You Fear?

Once Michael the archangel leads the angels in a fight to cast the devil into hell, there is the scripture that arrives in one’s mind: “Fear the one who can cast you into hell”.

Please read this passage closely to see if anything stands out:

Luke 12:4-10
“I say to you, My friends, do not be afraid of those who kill the body and after that have no more that they can do. But I will warn you whom to fear: fear the One who, after He has killed, has authority to cast into hell; yes, I tell you, fear Him! Are not five sparrows sold for two cents? Yet not one of them is forgotten before God. Indeed, the very hairs of your head are all numbered. Do not fear; you are more valuable than many sparrows. And I say to you, everyone who confesses Me before men, the Son of Man will confess him also before the angels of God, but he who denies Me before men will be denied before the angels of God. And everyone who speaks a word against the Son of Man, it will be forgiven him; but he who blasphemes against the Holy Spirit, it will not be forgiven him.”

Study Topic: “Angel of the Lord”

Biblical study also shows quite a few times where the “Angel of the Lord” (angel = messenger) actually seems to be God Himself giving a message to the listener, just as Jesus was fully human and fully God; a Man giving the Father’s message. If this is the case, and God can appear as an angelic being, then most certainly, is it possible that Jesus Christ can appear as an angelic being? Jesus was the Word made flesh. A scripture study on Angel of the Lord can be carefully examined, keeping close eye on the context in the following passages regarding Hagar, Abraham, Jacob, Moses and Gideon:

Topic of Study: Lord of Hosts

This phrase appears numerous times in the Bible. Further examination reveals that it refers to the “Commander of God’s angelic army.”

Michael will cast the devil into hell. Jesus warned back in Luke 12 to fear the one who can throw you into hell. Would Jesus advise to fear an angel? Look closely again at the verse: “Whoever denies me…will be denied before the angels of God”

1 Thessalonians 4:16 “For the Lord Himself will descend from heaven with a cry of command, with the voice of an archangel, and with the sound of the trumpet of God. And the dead in Christ will rise first.”

It was my previous assumption that this does not state that Jesus IS Michael; but that Jesus will descend alongside of Michael with “a shout, with the voice of an archangel and with the trumpet of God.”; in other words, Jesus will appear simultaneous to a loud sound of trumpets. However, one must reflect on the actual words in the text. If it is to say that He will descend with a cry of command (See: Lord of Hosts: Commander of God’s Army above) with the voice of an archangel, is the scripture saying that the Lord Himself if the Commander, and leader, Who will have the voice of an archangel? It is most certainly up for debate, and one must be careful how it is that we perceive the text.

Topic of Study: “Sound of a Trumpet”

Sound of a trumpet usually signifies a warning.

Psalms 47:5 God has ascended with a shout, The LORD, with the sound of a trumpet.

Jeremiah 4:19 My soul, my soul! I am in anguish! Oh, my heart! My heart is pounding in me; I cannot be silent, Because you have heard, O my soul, The sound of the trumpet, The alarm of war.

1 Corinthians 15:52 in a moment, in the twinkling of an eye, at the last trumpet; for the trumpet will sound, and the dead will be raised fnimperishable, and we will be changed.

Rev 1:10 I was in the Spirit on the Lord’s day, and I heard behind me a loud voice like the sound of a trumpet

Rev 4:1 After these things I looked, and behold, a door standing open in heaven, and the first voice which I had heard, like the sound of a trumpet speaking with me, said, “Come up here, and I will show you what must take place after these things.”

Rev 8:13 Then I looked, and I heard an eagle flying in midheaven, saying with a loud voice, “Woe, woe, woe to those who dwell on the earth, because of the remaining blasts of the trumpet of the three angels who are about to sound!”

John Calvin:
“He adds next, Behold! Michael, one of the chief leaders or princes, came to strengthen me. Some think the word Michael represents Christ, and I do not object to this opinion. Clearly enough, if all angels keep watch over the faithful and elect, still Christ holds the first rank among them, because he is their head, and uses their ministry and assistance to defend all his people. But as this is not generally admitted, I leave it in doubt for the present, and shall say more on the subject in the twelfth chapter.” “…By Michael many agree in understanding Christ as the head of the Church. But if it seems better to understand Michael as the archangel, this sense will prove suitable, for under Christ as the head, angels are the guardians of the Church. Whichever be the true meaning, God was the preserver of his Church by the hand of his only-begotten Son, and because the angels are under the government of Christ, he might entrust this duty to Michael.”

John Gill:
“Another prophecy in Dan. xii. 1, 2, 3. represents the second and personal coming of Christ ; for he is meant by Michael, who is as God, as his name signifies, equal to him ; the great prince, the prince of the kings of the earth, and the head of all principalities and powers.”
(A Complete Body of Practical and Doctrinal Divinity, The Baptist Standard Bearer, 1987 reprint)

The doctrinal understanding which suggests that Michael may be Jesus Christ should be one taken with careful consideration, however this does not mean that one must automatically go from one side of the road to the other in their beliefs. If such a possibility is correct, it does not make Jesus a created angel, but rather places Him in position of Leader, and Commander of angels. In fact, He remains as He is, as the Word, God, spoken of in John 1:1. His grand title of Sovereign Lord and Prince does not change.

Please examine the passages of scripture herein and pray upon the matter, that the Holy Spirit may lead you to an understanding which is scripturally based. In all cases of unsurety, it is best always to make no firm assertions, but rather to accept that there may be answers to which we cannot be 100% certain.

Scriptural Reminder:
Daniel 29:29 “The secret things belong to the Lord our God, but the things that are revealed belong to us and to our children forever.”