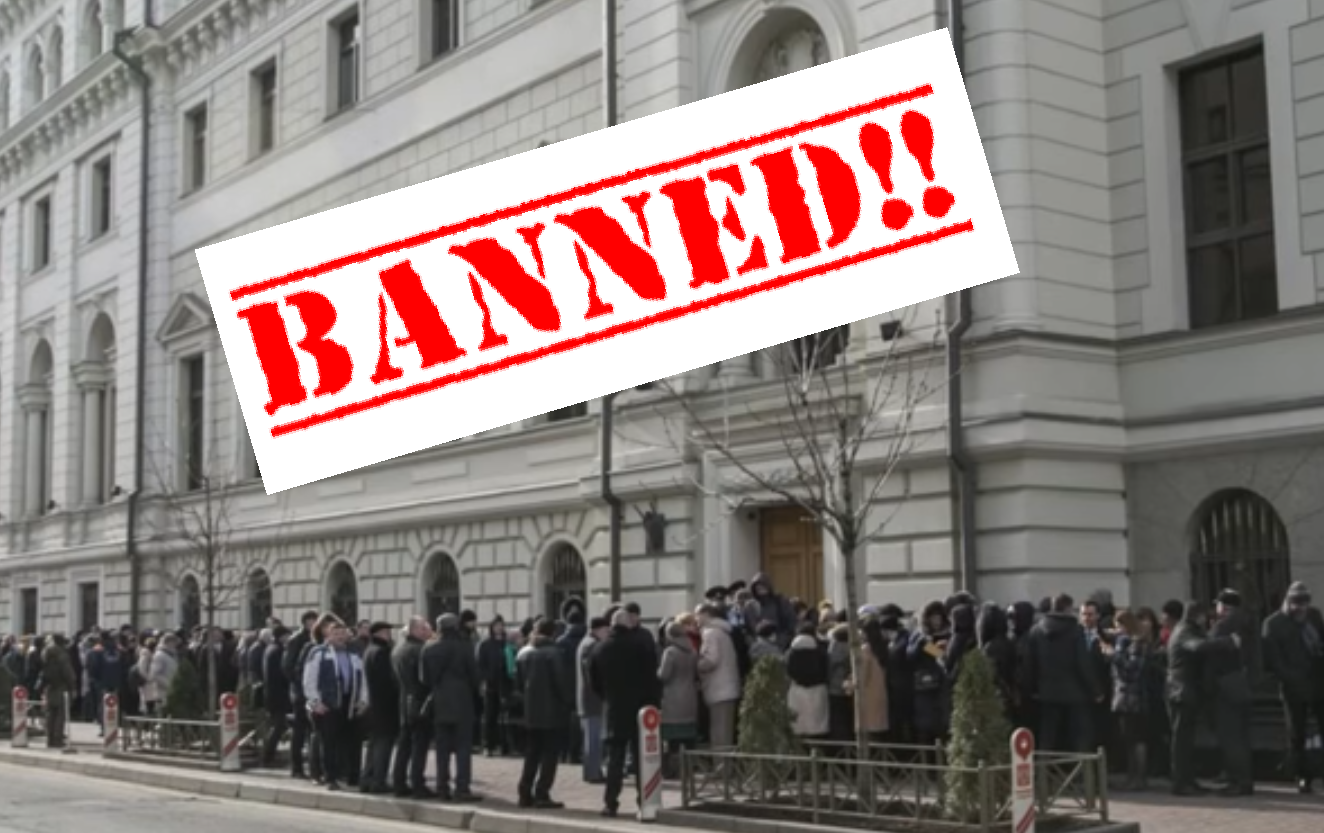 Jehovah’s Witnesses have been banned in Russia after the group was undergoing pressure from Russian Courts who considered them “extremist”. The government has ruled that nearly 400 Kingdom Halls are to be seized and liquidated, and all JW activities must be stopped immediately. Yaroslav Sivulskiy, who speaks on behalf of Jehovah’s Witnesses in Russia, says that the Witnesses will appeal the court decision.

Regarding the Jehovah’s Witnesses Moscow case in 1999:

”The sect has a strong anti-Government, antisocial and anti-traditional as well as anti-Christian orientation,” the prosecutors said. More than 21 witnesses are prepared to testify to the damage wrought by Jehovah’s Witnesses on their family life and finances. Written testimony has been provided by a top expert from the Serbski Center for Social and Forensic Psychiatry — notorious in Soviet times for its ”treatment” of dissidents — who found that ”the teaching and activity of Jehovah’s Witnesses contains factors that may lead to neuroticism and a state of depression.’ (New York Times, Feb 1999)

To defend itself against the ban, the Jehovah’s Witnesses website claims they can prove they are not extremist, because they have been around for 100 years. They also state that no one else in the world has accused them of extremism. However, they have come under Russia’s microscope multiple times regarding extremist statements made in their literature. As well, former Jehovah’s Witnesses have joined together in expanding public awareness of the Jehovah’s Witnesses practices which have resulted in deaths, suicides, mental and emotional damage, division of families, drug and alcohol abuse, divorce, custody battles, crimes, and financial devastation.

Over 90 of Jehovah’s Witness [Watchtower] publications were found to contain extremist views, including warnings against blood transfusions. Russia deems the blood warnings a threat to public health and safety after many JWs have died, including small children whose parents refused to allow them to undergo transfusions. To put Russians in danger of death violates Russian Healthcare laws, says Svetlana Borisova, attorney for the Russian Justice Ministry.

The Justice Ministry had suspended the JWs activity in March, pending the final Supreme Court ruling. On April 24, 2017, the Moscow City Court will hold a hearing examining the legality of the March suspension.

Beginning in 1995, the Committee for the Salvation of Youth from Totalitarian Cults (“the Salvation Committee”) launched 5 criminal investigations against Jehovah’s Witnesses, due to damage done mentally to members. In April 1998 after having investigations 4 times dismissed, a new investigator in Moscow terminated the criminal proceedings. However, the investigator found that “Jehovah’s Witnesses alienated their followers from their families, intimidated believers, and controlled their mind, as well as inciting them to civil disobedience and religious discord.” The investigator found that the Jehovah’s Witnesses acted in violation of Russian and international laws, but that no crime could be established. She discontinued the criminal case, but recommended that the prosecutor of the Northern District of Moscow bring a civil action for the Jehovah’s Witnesses to be dissolved and it’s activity banned. (See: European Court of Human Rights: CASE OF JEHOVAH’S WITNESSES OF MOSCOW AND OTHERS v. RUSSIA, Application no. 302/02)

Here is an actual talk given by an elder of Jehovah’s Witnesses discussing what happens when a JW gets found guilty of sin, and is disfellowshipped. “Sin” includes questioning the elders or the doctrines of JWs.

There are many more extremist views that may be found in the teachings and history of Jehovah’s Witnesses and the Watchtower Society. The public is advised to fully research the detrimental effects which former JWs and other former cult members have faced prior to joining or “studying” with them.