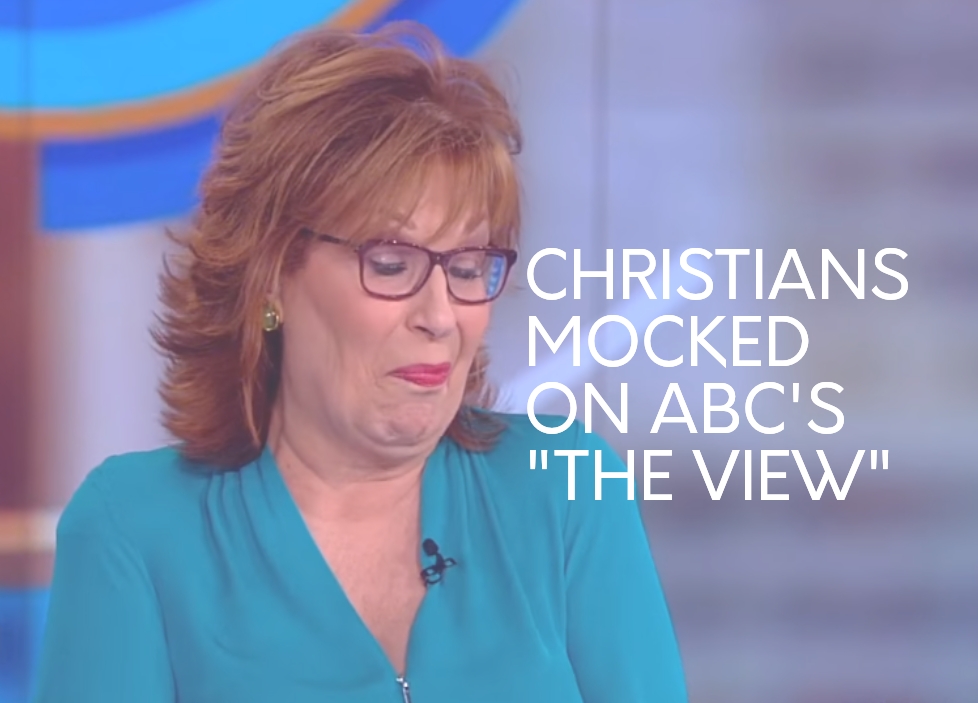 ABC has refused to require The View to terminate Joy Behar as she insulted Vice President Mike Pence’s Christian views.

Joy Behar, co-host of the “View” refers to herself repeatedly as a “comedian”. It seems she tends to use the term as a mask and a scapegoat any time she gets called out for making offensive comments. Her demeanor is anything but that of a comedian, but rather she is antagonistic, arrogant, sarcastic, and frankly, not funny. She also very easily changes masks in defining what she is, insults others beliefs, and commonly uses her alleged position as a “comic” as a cover-up.

In February 2018, The View’s Joy Behar referred to those who claim to hear Jesus’ voice as mentally ill. Meghan McCain, a co-host on the panel, attempted to speak up for Christians who are attacked by Liberals, and was quickly stifled by show moderator and far leftist, Whoopi Goldberg. The panel was thereafter forced to address the despicable comment on stage when backlash came in defense of Christianity and United States Vice President Mike Pence, who was the target of the insults.

In defense of herself, Behar claimed she herself IS a “Christian”. However, a YouTube video surfaced showing the self proclaimed comic being interviewed by a Catholic Priest.

In the video, Joy Behar :

In other words, Joy Behar is not an agnostic. She is an atheist, hiding behind the Agnostic front, claiming publicly to be a Christian. If she so easily can mock one who says they follow the voice of Jesus, and do so on national television, it is no secret that her stance is undeniably Atheist.

When the Catholic Priest called her out as to why she said, “Pray for Japan” on her Twitter after admitting she doesn’t pray, she says, “I dunno…. put it out there just in case.”

Behar and most other false “Christians” claim that because they were married in a Catholic church or baptized their children, it is enough to have been affiliated with Catholicism, and thereby retain the title as “a Christian”. In Behar’s case, there is enough evidence indicating that she is the true portrait of a false Christian.

In the 2011 interview with Behar, the Priest did not stand up for Christ. Rather, he laughed off her arguments, and in what appears to be an attempt to be non-combative, stated that he likes people who question faith. He further defines theology as “faith seeking understanding”, after he admitted that Catholics do not read the bible.

Fox News on The View attacking and mocking Christians

The View was forced to defend themselves after backlash, as Whoopi Goldberg is clearly uncomfortable and admits “I’m trying to get outta this because this is what they’ve asked me to do.”

“The View” Attempts to Defend Themselves, but Stifles Christian Objection

John 10:27-28 My sheep hear my voice, and I know them, and they follow me: 28 And I give unto them eternal life; and they shall never perish, neither shall any man pluck them out of my hand.

Only those who belong to Christ can “hear”, or understand, the teachings of Jesus. This does not mean one hears literal voices in their head. When Jesus was asked why He spoke in parables, He made known that the knowledge would only be given to those that follow Him.

Matt 13:11 And he answered them, “To you it has been given to know the secrets of the kingdom of heaven, but to them it has not been given.

The Holy Spirit can work through the conscience, the heart, and through scriptures in the Holy Bible. If one is truly a follower of Christ, they will “hear” the voice of Jesus, speak boldly with pride in their salvation in Him, and be without worry of persecution for their faith.

Patheos Joins in the Christian Mocking

Evangelical Christians are amongst the most mocked religious group in society. The atheist website Patheos, implies that those who believe in God are “simple minded people susceptible to magical thinking.”

“By acting like Behar is insulting his beliefs, Pence is basically admitting that he does hear literal voices, and that he isn’t just interpreting what he believes are signs from God.” -Patheos

As Christians, we remain steadfast in our faith, knowing that not all are going to like us, respect us. This constant lashing out against Christians by atheists, the leftist media and websites, false Christians, and those who have vitriol and hatred for us,  remind us of the words of Jesus Christ:

John 15:18-25 “If the world hates you, know that it has hated me before it hated you. 19 If you were of the world, the world would love you as its own; but because you are not of the world, but I chose you out of the world, therefore the world hates you. 20 Remember the word that I said to you: ‘A servant is not greater than his master.’ If they persecuted me, they will also persecute you. If they kept my word, they will also keep yours. 21 But all these things they will do to you on account of my name, because they do not know him who sent me. 22 If I had not come and spoken to them, they would not have been guilty of sin,[a] but now they have no excuse for their sin. 23 Whoever hates me hates my Father also. 24 If I had not done among them the works that no one else did, they would not be guilty of sin, but now they have seen and hated both me and my Father. 25 But the word that is written in their Law must be fulfilled: ‘They hated me without a cause.’

The ABC Facebook page has been inundated with backlash from furious defenders of Christianity. Many are requesting to know who the show’s sponsors are, as they plan to ban companies who support the network. Posts flood the page demanding the show to be removed off the air, after blatant disrespect against Christians. Christians are pulling together to stand together in the face of repeated persecution which is now considered “normal” in American media and society.