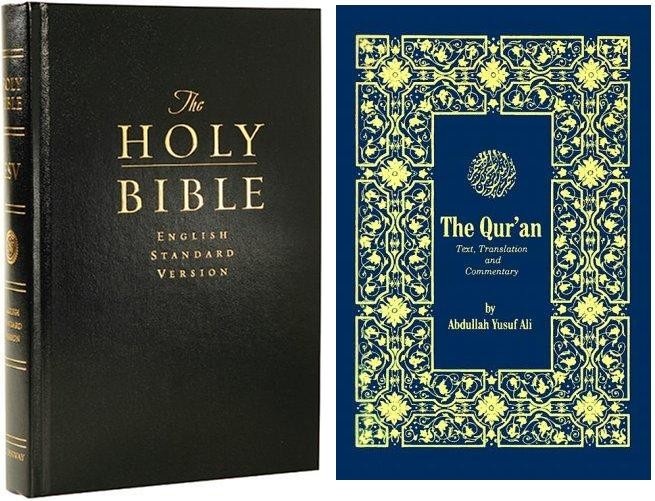 Islam vs Christianity Beliefs: The Basic List of Differences

Islam book: Quran & Sunnah (what Mohammed said, did and believed)

Islam: Allah is the name of God.

Christian: YHWH (Yahweh) is the name of God.

Islam: Jesus was just a prophet.

Christian: Jesus was God made flesh.

Christian: God’s message to man was revealed through the mouth of Jesus.

Islam: Islam is the only true religion.

Christianity: Various sects of Christianity share the common essentials of the Christian faith, but “non-essential” doctrines & opinions may differ, thereby creating separate denominations. These nonessentials do not necessarily effects one’s salvation. Many of the world’s most prominent theologians believe that there is no one particular true Christian religious denomination.

Islam: In some cases, it is ok to be deceitful or lie to further advance Islam, or protect one’s self. (Doctrine of Taqiyya)

Christianity: It is never ok to be deceitful or lie, whether or not to further a cause.

Islam: If someone fights you, you are to slay/kill them.

Christian: If someone fights you, turn the other cheek and do not fight them.

“Fight in the cause of Allah those who fight you, but do not transgress limits; for Allah loveth not transgressors. And slay them wherever ye catch them, and turn them out from where they have Turned you out; for tumult and oppression are worse than slaughter; but fight them not at the Sacred Mosque, unless they (first) fight you there; but if they fight you, slay them. Such is the reward of those who suppress faith.”

Islam: Islam is the light of the world.

Christianity: Jesus is the Light of the world.

Christianity: Pray anywhere, in any condition, in any position.

Islam: Charity is one’s obligation, at the rate of 2.5% of income, plus voluntary giving.

Christianity: Give to the poor. Giving is it’s own reward. No set amount.

Islam: Fasting is mandatory. Some are excused.

Islam: One must travel to Mecca, Saudi Arabia, at least once in their lifetime.

Christianity: No travel is required to prove one’s faith.

Islam: Pork isn’t allowed. Meat must be cut and blessed a certain way.

Christianity: Allows meat. No abstaining from any particular foods is required.

Islam: One has no intermediary. Each has a direct relationship with Allah.

Christianity: All things in Jesus name, including prayer. Jesus is the Mediator between man and God.

Islam: One cannot date. Marriages are arranged. Polygamy is allowed.

Christianity: Dating is allowed. Marriages are never arranged. Polygamy is not allowed.

Islam: Women must cover up and wear the hijab.

Christianity: Women should dress modestly. No special clothes are necessary.

Islam: Man is responsible for providing for wife. Wife must raise children and clean the house.

Christianity: A husband and wife together may raise children and share in household responsibilities.

Christianity: None are forbidden.

Islam: Jesus wasn’t crucified. The person who was crucified was an imposter. Jesus simply raised up.

Christianity: Jesus was crucified on a cross and suffered tremendously, paying the price (atonement) for humanity with His own bloodshed, in order to provide man with forgiveness of sin, leading to salvation of the righteous.

Christianity: Men are born with an automatic desire to sin (sinful nature).

Christians: Believe in obeying God as ultimate authority, and following the law of the land. Sharia law is rejected.

Islam: When Jesus returns, He will kill a bunch of pigs, break the cross and force everyone to be members of Islam.

Christianity: When Jesus returns, He will gather the elect, our physical bodies will be resurrected, we will see a new heaven and earth, and God will dwell with His chosen ones.

As typical in many cults, when one leaves Islam, they will face shunning and disassociation from friends and family. In Christianity, shunning is not practiced, unless the particular church has a cult-like groupthink pattern, placing themselves above outsiders. Jehovah’s Witnesses also practice shunning, however they are not considered by most doctors of divinity to be a Christian organization.

When comparing Islam vs Christianity, one can be sure that the leaving of any sect or denomination in no way results in death. In Islam, it is common for anyone who leaves to be viewed as an apostate, also similar to Jehovah’s Witnesses. The cults teach that if one leaves the group, they leave God. Muslims teach that death is the penalty for leaving the faith.