The magazine called Rumiyah (Arabic: رومية‎) means “Rome”. Rumiyah is a reference to a hadith. Plural of hadith is Aḥādīth. Hadith is second to the Quran, and is a record of the prophet Muhammed’s beliefs, words and actions, and is a source for Sharia laws of Islam. Rumiyah, or “Rome” is related to a hadith that alleges that Muslims would conquer Constantinople & Rome.

Here are the facts about the Rumiyah Magazine:

Who is Church Burning Advice Directed at?

The Rumiyah magazine is not talked about by mainstream liberal media, even though it is revealing plans to burn down Christian churches in the name of Islam. It advises all Muslims who follow Islam to turn Jihadist, with quotes from the surahs (scriptures) in the Quran. The Christian Church fire plans are aimed at large churches. The first edition even says for Muslims to kill priests.

What Does Rumiyah Instruct Muslims to Do?

Keeping in mind a passage from the Quran:

Quran 8:12 “When your Lord revealed to the angels: I am with you, therefore make firm those who believe. I will cast terror into the hearts of those who disbelieve. Therefore strike off their heads and strike off every fingertip of them.”

The Quran commands to kill unbelievers. Those who claim to truly follow the Quran (what the media labels “Extremists”) follow the Quran to the word, and take it’s advice to kill. They believe acts such as church fires and other killing or suicides in the name of Allah sends them to paradise. Anyone who kills in the name of Islam is praised in the Islam magazine.The Rumiyah has instructed Muslims on how to kill non-Muslims using arson, vehicles, bombs, weapons, etc.

“Vehicles are like knives, as they are extremely easy to acquire. But unlike knives, which if found in one’s possession can be a cause for suspicion, vehicles arouse absolutely no doubts due to their widespread use throughout the world,” -Rumiyah magazine; 2016

“Because many flammables are a part of everyday living, arson attacks are extremely difficult to prevent. Indeed, no more than a large container of gasoline (petrol) is needed for a successful attack. Of course, the gasoline can be acquired from any local gas station, where it is filled into the container,” the article continues. “This procedure should not arouse any suspicion, as it is quite common to follow, especially when obtaining gas for a lawnmower, amongst other reasons.” -Rumiyah magazine

The adherents of Islam are told to:

The Islam followers give a detailed description of how to carry out burning down churches and buildings through arson:

“Initiating the arson attack from inside the building will allow the fire to rage before grabbing the attention of those outside. If one does not have formal access to the building, then he can seek alternative ways to breach the building’s security while undetected,”

“An example of this is accessing the building during opening hours, while securing a suitable location to hide until closing time, exiting only when the coast is clear to commence the attack.”

“Throughout execution, one should avoid pouring gasoline directly from a container on any fires, as this could result in fire spreading to the container and thus himself catching fire,” the article states. “Instead, once an area is properly dowsed, he should ignite the gas from a safe distance or hurl a burning Molotov cocktail on the area if possible.”

“Arson attacks should in no way be belittled. They cause great economic destruction and emotional havoc and can be repeated very easily. Even if such attacks do not always result in the killing of the enemies, Allah has promised to reward the mujahid for simply harming and enraging them.”

Screenshot of Rumiyah, with commands to kill: 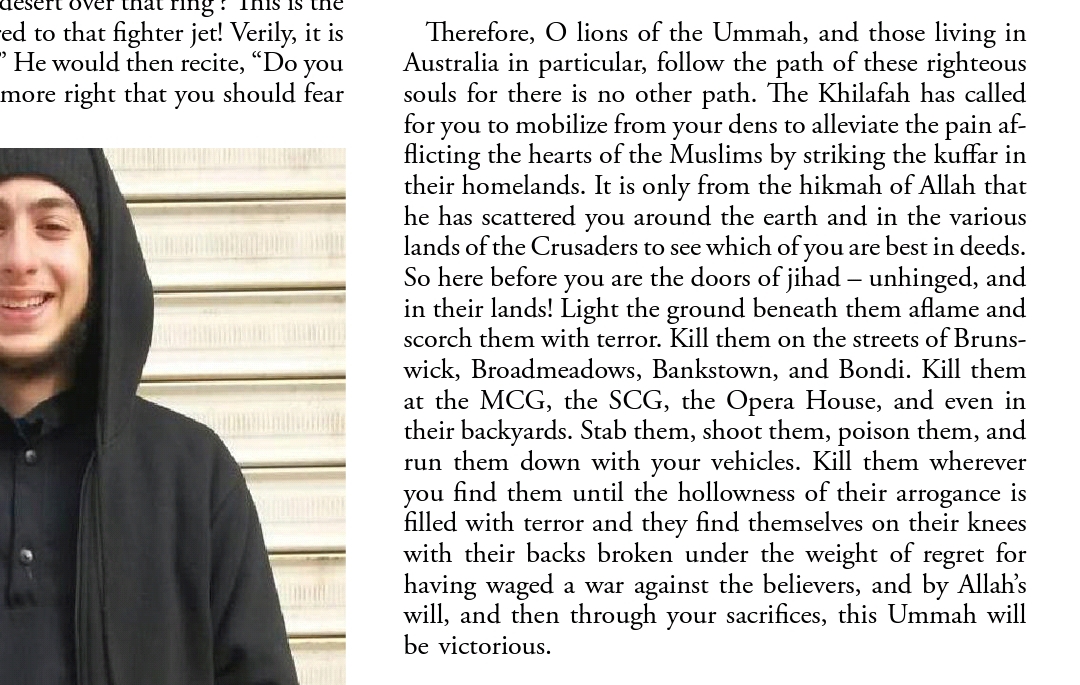 WARNING: You are about to download a PDF file of terrorist propaganda. This magazine contains cultic instructions to commit murder. Be advised to use caution in reviewing the material:  Rumiyah ISIS Magazine 1st-issue

The high incidents of Christian church fires and attacks caused news media outlets to denounce and vilify anyone who suggests that Muslims have initiated the fires. However, none of the media outlets have quoted the commands to kill taken from Ramiyah magazine, or the Quran. ISIS wanted to go after a “megachurch”. It would then be no surprise if we are to learn that they would go after the most distinctive or largest churches, including those in France and other parts of the world.

It is as if the religion of Islamic Jihadists and the religion of everyday Muslims are supposed to be viewed as different, even though they both follow the Quran. Muslims have created the “us versus them” mentality inside their own religion, which is typical of cults. Yet, they are claiming to oppose a piece of themselves. (Jihad) The same surahs or “scriptures” are in front of their eyes. The same book is what they devote their lives to. A “peaceful Muslim” who refuses to denounce Islam cannot follow some rules of the Quran, while ignoring the rest, such as the commands to kill.

Facts are Facts: Christians Under Attack

There were 1063 hate attacks against France’s Christian churches in 2018, 875 of which were vandalized. Attacks also included thefts, and even human feces spread in a church. While there is no specific list that can outline every single attack and who is responsible, it is no coincidence that just previously, Islam Jihadists called out for killings of anyone opposing Muslims, to specifically include burning down churches.