Are Jehovah’s Witness False Prophets? Are Jehovah’s Witnesses really guilty of falsely prophesying Armageddon in 1914? What about 1915, 1918, 1925, and 1975? Is there proof of these claims? Let’s take a look at actual copies from Watchtower Society literature.

A thorough examination of the history of Jehovah’s Witnesses reveals a monumental list of prophecies made by the Watchtower Bible and Tract Society. The quotes shown in this article are directly related to false prophecies of Jehovah’s Witnesses. In keeping with the basic, user friendly theme of this blog, I will offer the most popular false prophesy years in Watchtower history, along with just a few quotes from the Watchtower Society’s old publications. The reader is free to do a further in-depth analysis on the false prophecies of Jehovah’s Witnesses Watchtower Society using additional sources, which are very easy to find. The books and publications mentioned may be found on various sites such as eBay, Amazon, antiquarian bookstores and even by searching Google for the title of the book, in quotes.

The following information falls under Fair Use Laws, and is intended as a guide for research purposes. Photos, quotes, copies and clippings are Copyright of the Watchtower Bible and Tract Society; Christian Congregation of Jehovah’s Witnesses.

Jehovah’s Witnesses false prophecies 1874
The second coming of Jesus invisibly, and beginning of the period for the generation that would see the end.

Images taken from publications offered by the Watchtower Bible and Tract Society: Prophecy, 1929; and Studies in the Scriptures,  The Finished Mystery

Jesus reigns in heaven as king

Image taken from publications offered by the Watchtower Bible and Tract Society, Time is At Hand, 1911 p.239

Chart of the Ages appearing in Studies in the Scriptures:

“The date of the close of that battle is definitely marked in scripture as Oct.1914. It is already in progress, its beginning dating from Oct, 1874″

This image of “Thy Kingdom Come”, part of the Studies in the Scriptures series published by the Watchtower Bible and Tract Society,  features a pagan symbol of the Egyptian sun god Ra. Pyramidology was practiced in determining the expected time of Armageddon. Passageways in the pyramid were measured, and calculations were used to prophesy 1914 as the end of the world.

Jehovah’s Witness false prophecies 1915- Governments will be overturned.
Armageddon changed from 1914 to 1915 after re-figuring chronological dates and removing the year 0 as a counted year.

“…1918 when God destroys the churches wholesale and the church members by the millions.” The Finished Mystery,  p. 485 (Studies in the Scriptures)

“… there is evidence that the establishment of the kingdom in Palestine will probably be in 1925,  ten years later then we once calculated.”; Studies in the Scriptures Series VII, Finished Mystery, p.128

Preparing for the early prophets and ancient worthies to return:

” … we may expect 1925 to witness the return of these faithful men of Israel from the condition of death.”; Millions Now Living Will Never Die, p.88

One of the most interesting Watchtower false prophecies involves the “House of Princes”,  called Beth Sarim. Beth Sarim was built by Rutherford from the donations made to the Watchtower Society by Jehovah’s Witnesses. The house was lavishly furnished and Rutherford moved in. It is also said that he worked there. He claimed it was for the prophets to live in after Armageddon.

“At the time, it was believed that faithful men of old times, such as Abraham, Joseph, and David, would be resurrected before the end of this system of things and would serve as “princes in all the earth,” in fulfillment of Psalm 45:16. This view was adjusted in 1950, when further study of the Scriptures indicated that those earthly forefathers of Jesus Christ would be resurrected after Armageddon.” ; Watchtower, Nov 1, 1950, p. 414-417

God is the author of the Watchtower:

“Unlike any other Organization the Jehovah Witnesses say they alone represent God as his spokesman on earth. “The Watchtower is a magazine without equal on earth because God is the author.” Watchtower April 15,1943 pg.127

“ … within a few years at most, the final parts of Bible prophecy relative to these last days will undergo fulfilment.”; Watchtower May 1,1968 p. 272

“True, there have been those in times past who predicted an “end to the world” even announcing a specific date…The end did not come. They were guilty of false prophesying.” Awake Oct. 8,1968 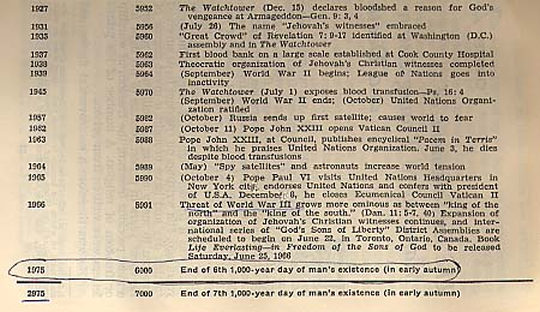 “The church systems would have the people believe that only those who become church members can be saved. The Bible never taught any such doctrine. Jesus died not only for those… members of the church,  but for all.”

There is no question that the Watchtower Bible and Tract Society made repeated false prophecies regarding Armageddon. At the time, they said they were operating under the Holy Spirit and Jehovah’s direction. Today, they claim that the dates are in the past, and the “light gets brighter”, and therefore one shouldn’t look back at the errors of the “imperfect men”. So, they say “the light gets brighter”, as if this refers to making mistakes in bible understanding, putting statements in print, publishing them, claiming they are God’s dates, and then realizing they were wrong. They use a scripture in Proverbs for their defense which states:

Proverbs 4:18 But the path of the righteous is like the light of dawn, which shines brighter and brighter until full day.

It is interesting to note the entire chapter of Proverbs 4 to determine what it is talking about, thereby keeping within it’s context. The chapter discusses the ways of the wicked, and compares in verse 18, to the way of the righteous. This is a classic example of the Watchtower choosing a scripture with good wording to mask their error of Armageddon false prophecies, and claiming that their justification of the error comes directly from scripture. However, this scripture was not at all referring to making a false prophecy and then correcting it. It is stating the difference between the wicked and the righteous.

Matthew Henry’s Commentary on Proverbs 4:18 regarding the “light gets brighter” scripture, with a sound and reasonable explanation of the text:

“It is a shining light. Their way shines to themselves in the joy and comfort of it; it shines before others in the lustre and honour of it; it shines before men, who see their good works, Matt. 5:16. They go on in their way with a holy security and serenity of mind, as those that walk in the light. It is as the morning-light, which shines out of obscurity (Isa. 58:8-10) and puts an end to the works of darkness. It is a growing light; it shines more and more, not like the light of a meteor, which soon disappears, or that of a candle, which burns dim and burns down, but like that of the rising sun, which goes forward shining, mounts upward shining.”

Watchtower Society comment on Proverbs 4:18, regarding the “light gets brighter” scripture, which is used as their means of justifying their history of false prophecies:

“The earthly part of Jehovah’s organization is moving ahead in various ways. For instance, our understanding of Bible truth is constantly becoming clearer. This is to be expected, for “the path of the righteous is like the bright morning light that grows brighter and brighter until full daylight.”

For more quotes, please visit our friends over at LetUsReason.org