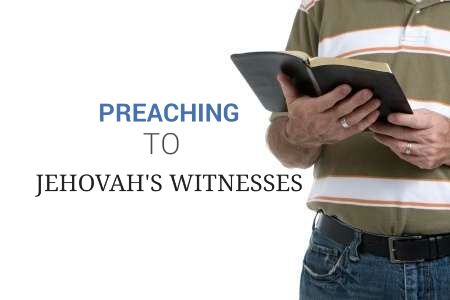 A preaching man from England approached Jehovah’s Witnesses for a friendly, Christian discussion about the bible and the JW beliefs. The kindness of the Christian man is noted as one of the best displays of calm, cool and collected encounters that I have yet to see in JW outreach and street preaching. The Jehovah’s Witnesses were out for the day ready to hand out Watchtower literature, when along came a stranger to give the gospel properly from God’s Word.

The Christian man brings up scriptures which discuss the return of Jesus. He begins questioning the way that Jehovah’s Witnesses interpret and understand basic scriptures, simply by using an approach of cordial, friendly chatting. The Jehovah’s Witness couple responds kindly, lending to a quality discussion on the Word of God. No arguing, no raising of voices… Just a wonderful depiction of the incredible skill of Christian street preaching.

Likely, the Jehovah’s Witnesses did not expect the Christian to approach and begin questioning them. Topics such as failed prophesies arose, and it is clear that the JWs were unaware of the significance of the Watchtower’s scandalous history as false prophets. While the gentleman and his wife inadvertently admitted to the failed 1975 prophecy, they actually parroted Watchtower in stating that the brothers in the congregations came up with the date themselves, due to their own error. The gentleman had also never heard of the failed 1925 Armageddon prophecy. Further discussion includes discussion of more false teachings by JWs, however the Christian man brings up the same in a gentle, yet firm way.

This is a wonderful example of how kind Christians have the ability to apply their biblical understanding in a manner that is condusive with presenting the message in meekness. The Christian shows tremendous patience, love, and peace in his dealings with the elderly cult members.

Have a look at the recording, and use this as an opportunity to obtain pointers on one way to preach to Jehovah’s Witnesses in a spirit of love and concern. Not all Christians have such a gift to remain calm and cool. Scriptures properly backed up the man’s points, showing a good grip on understanding the most important essentials of the Christian faith.

I highly commend the actions and knowledge of this Christian during his street preaching. With confidence, he stood up for truth with the intent of giving the message of Christ to those who have been wrongly taught.