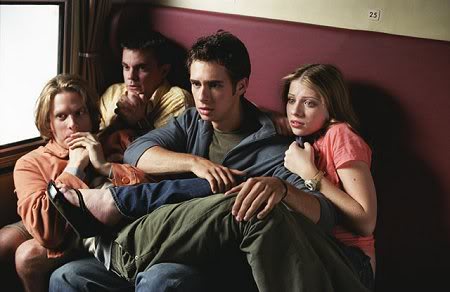 Reaction from viewers: Screenshot taken from YouTube video paused clips. Notice Jesus pictures hanging in background as they watch gruesome TV murder scenes in “The Walking Dead” (October 2016) *Due to disturbing graphic violence, this article will not provide links to actual clips of The Walking Dead tv show or viewer reaction videos that contain clips of the violence.

This is the time to take a cold, harsh look at reality. Millions of viewers geared up to watch The Walking Dead, a show that boasts risen corpses and people engaging in brutal murder.

Alarmingly, some avid Walking Dead fans go on with their days, perhaps say a prayer here and there, mutter “God bless America”, condemn murder, advocate for being known as a Christian nation, and pop open a beverage for the next episode of “The Walking Dead”; notably the most Satanic inspired show on public TV.

To familiarize myself with the general subject matter of that which was cluttering my Facebook feed, I did a Google search for “The Walking Dead” commentaries. It quickly became apparent exactly what had just happened to millions of viewers. They got sucked into Satan’s trap. While they thought their favorite show was one big reason to get excited, they seemed shocked and mortified, as seen on random YouTube reaction videos. While watching these videos on silent mode, and keeping my eyes strictly on the viewers, I couldn’t believe my eyes. The Walking Dead fans were so attached to this show and it’s horrid violence, that they actually gathered in crowds; some even screaming out in shock during gruesome murder scenes. Based on Social Media posts, many went to bed angry, manipulated, horrified, “broken hearted”, anxiety-ridden, physically sickened, and sleepless. Exactly what Satan wants.

Proverbs 6:16-19: There are six things which the LORD hates, seven which are an abomination to him: haughty eyes, a lying tongue, and hands that shed innocent blood, a heart that devises wicked plans, feet that make haste to run to evil, a false witness who breathes out lies, and a man who sows discord among brothers.

The Root of All Evil

The show is the epitome of what the Lord detests. Satan is wandering this earth like a roaring lion, ready to devour his prey. And he can do so in ways which have become “normal to society”. People are lured in to evil by the millions, engrossed in filth. They gear up for it. They look forward to it. They get excited about watching evil. Yet, the excuse is, “It isn’t real.” They now realize, it is very real when human reaction takes over, and a TV show can control the mind to the point of terror, shock, and heartbreak. This is exactly how Satan operates; through every emotion felt by viewers before, during, and after the show.

What is the lure of The Walking Dead?

Meanwhile, these same people are asking God to bless their country. They share the “bring prayer back into schools” Facebook and Twitter posts. Yet, they can’t help but watch one more murderous or haunting movie.

Children Sucked into Evil by Parents

A photographer gathered several small children who’s parents thought it fine to dress their kids up as risen dead zombies wearing fake blood, acting out murder scenes. The backlash caused the photographer’s Facebook to be shut down for a few days. Have a look at the clip below before reading on.

The Walking Dead even makes reference to bible scriptures, portrays a character named Jesus, and has an attraction at a theme park, luring people to walk through and become terrorized. Undoubtedly, it is pure evil.

Friendly reminders, click to see a glimpse of each simple scripture.

Where Has God Gone? Why is this happening?

Deut 31:18 (click scripture for a glimpse) indicates that God can turn his face from a nation. Not for watching one TV show, but for all of the accumulated evil acts of men. Satan has sucked in people by the millions, and the Lord cannot look down at such shameful and debased actions.

We have an instruction to be obedient to the Word of God, lest we be punished. Punishment can come in any form or fashion. It does not mean that true Christians can lose their offer of salvation in Christ just because they sinned. However, repetitive gross sinning and willfully rejecting the words of the Lord Jesus may indicate that the Holy Spirit is not operating in one’s life. For that very reason, the Lord can turn away, and allow Satan to act in one’s life. Society has come to accept this as “every day normal”.

How Do I Resist Temptation?

It is imperative as Christians that as the time draws near, we take heed and stay on the watch like faithful servants. Avoid evil. Fight temptation by asking for help from the Lord in a most humble manner. Thank Christ for all He has offered you, as we are so undeserving of His free gift of grace.  Remind yourself that you must be God fearing and not fall into temptation and humor Satan, for that is exactly what the devil wants. Ask the Lord to remind you when you are about to do wrong, and provide a way out. To offend the Lord your God is nothing that any believer should ever take pleasure in. Avoid it at all costs.

How to Stop Sinning