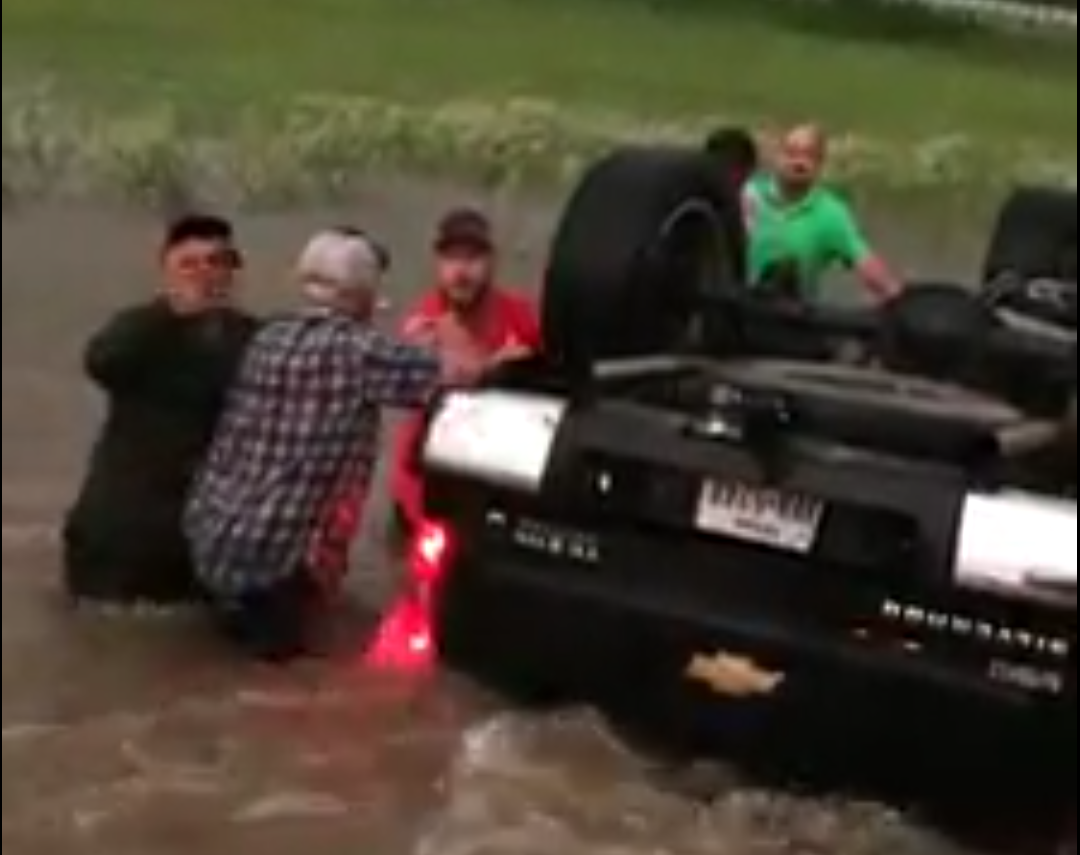 God’s providence is one of the most profound topics of study that one can delve in to. We have all heard that God is everywhere all of the time. This story happens not by chance, but purely by God’s perfect timing and divine power.

The vehicle was steady, unmoving, and firmly planted.

The vehicle landed in a precise location where multiple strong men were nearby, and could get to it on foot.

The vehicle landed in a place where someone would film the incident not realizing at that moment that it would make it’s way to a Christian website, and eventually be watched by you.

An elderly man would slip and fall into the waters. At that moment, a man would be placed directly in front of him, and he would be used as a way to help the elderly man rise to his feet, unharmed.

The baby was removed and a place was available nearby to secure her.

The screen would go black, so as not to burn a scene in your mind. Instead, you’d pay attention to only the sounds; One sound in particular.

A woman who was large in faith would be nearby. She would be a woman with a voice like thunder, unafraid to call out to the Lord, no matter who was listening. She would have a loud enough voice to be heard by thousands of people. She would not know it, but her call to Jesus would go “viral”.

Stranger’s hands would be placed on the baby. In the midst of tragedy, yelling, panic and chaos, the Lord would give good sense to those present. He would allow angels to control the hands and precise movements of those who were needed.

Nearby, enough people would be available to tend to a toddler, also at risk of losing life if not for the Hand of Christ and His mighty providence.

All would be given a job; whether to witness the event, to contribute, to pray, or to take part in the miracle.

You found it not by accident. But by God’s providence. Had you not been looking at this very minute and come across the article, you may never have been able to hear the tragedy turned miracle.

Romans 8:28 And we know that for those who love God all things work together for good, for those who are called according to his purpose.

“Providence means that the hand of God is in the glove of human events. When God is not at the steering wheel, He is the backseat driver. He is the coach who calls the signals from the bench. Providence is the unseen rudder on the ship of state. God is the pilot at the wheel during the night watch. As someone has said, ‘He makes great doors swing on little hinges.’ God brought together a little baby’s cry and a woman’s heart down by the River Nile when Pharaoh’s daughter went to bathe. The Lord pinched little Moses and he let out a yell. The cry reached the heart of the princess, and God used it to change the destiny of a people. That was providence. That was the hand of God.”

—From Edited Messages on Esther by Dr. J. Vernon McGee

More: Where is God in your life?