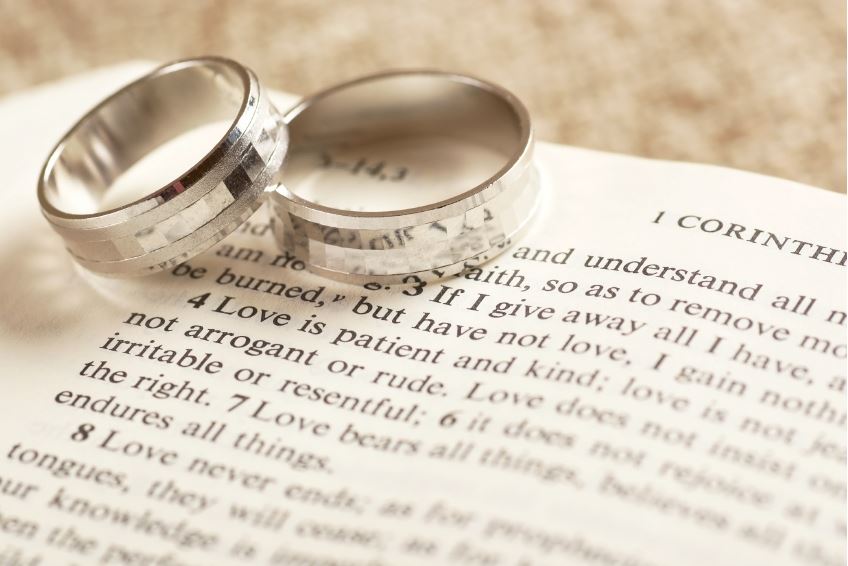 There are a lot of questions surrounding the topic of Christians marrying unbelievers. What constitutes “an unbeliever”? Varying schools of thought may suggest that an “unbeliever” can be any one, or all of the following:

Because of the wide definition that may categorize an “unbeliever”, as well as varying doctrinal viewpoints, it can lead to a very unsettling theological roadblock that begs the question, “What is the right answer on the topic of marriage and divorce between Christians marrying unbelievers, and believers divorcing unbelievers?” And does this ancient counsel include today’s marriage laws?

Scripturally, Who Can a Christian Marry?

A common statement by ministers, pastors and bible students is to “marry only in the Lord”. This is taken from 1 Cor 7:39 which actually speaks in the context of widows whose husbands have died. Therefore, this scripture will not be used to answer the direct question of who can a Christian marry?

1 Cor 7:39 “a wife is bound as long as her husband lives; but if her husband is dead, she is free to be married to whom she wishes, only in the Lord.”

Another argument is taken from 2 Corinthians, where admonition is given not to be unevenly yoked.

2 Cor 6:14 Do not be bound together with unbelievers; for what partnership have righteousness and lawlessness, or what fellowship has light with darkness?

But, the argument has been made that Paul was not discussing marriage laws in this situation, because if it were a direct order pertaining to marriage, it would have been extremely clear in the passage.

In the old Testament, Deuteronomy 7:1-4 describes the admonition given to the Israelites not to marry members of certain groups; namely: “the Hittites and the Girgashites and the Amorites and the Canaanites and the Perizzites and the Hivites and the Jebusites, seven nations greater and stronger than you”.

Who was being discussed in Deut 7:1-4, who the Israelites were forbidden to marry under Old Testament instruction? Nations of idols, warlike tribes of Palestine, Jordan, etc. They were vicious idolaters that were forbidden. (See: Jamieson’s commentary.)

Is one to assume that the warning given by God in the Old Testament not to intermarry with the reprehensible tribes of idolaters should stand as a direct biblical admonition worldwide for Christians not to marry others outside a particular faith? If it is not a command included under the New Covenant, then how shall a Christian determine whom they should marry?

Example: Was this marriage wrong?

A woman who was once a Quaker gave birth to a son. The son grew up and began to study with Jehovah’s Witnesses. The son met a woman who became his girlfriend. They became baptized and converted to Jehovah’s Witnesses, so the 3 became members of an unchristian cult. They were, by way of Protestant, Catholic theology, not Christians. They would be considered “unbelievers”. Later, the couple left the cult and became Protestant Christians and remain so until this day. Shall both, who were called “believers” [as per cultic theology] have been considered “unbelievers” [under true Christian theology]? Were they “unbelievers” if they did not accept Christ as their Lord and Savior (non-trinitarian)? Was there sin in one marrying another? The son said, “She was put in my life for a reason. I believe God divinely orchestrated the day I met her, and made her my wife.” The husband and wife bore 3 children into a cult, all of whom are now Christian believers: two married to a Catholics, and one is an unmarried Protestant. Was the marriage in violation of biblical counsel?

The woman, who was Quaker turned JW, was removed from the JWs for committing the “sin” of smoking. She died having faith in God, but not [to my knowledge] having found salvation in Christ. In fact, Jesus was not her Lord and Savior when she died. She still believed in JW theology. Her husband, a lifelong atheist, accepted Christ right before he passed away, after grieving over his former ways.

Only the Lord knows who was saved, who went to heaven, or who will.

A student writes in to Pastor and brilliant Protestant Theologian, Dr. RC Sproul, who is questioned as to whether he would marry a believer to an unbeliever. See his thoughts here on Ligonier.

Due to a lack of definitive biblical instruction, it should be left up to each one’s conscience, with direction sought from the Lord as to whom they should marry. Wise counsel is given to ask the Lord to lead one’s steps when choosing a husband or wife that the Lord finds acceptable. Does the husband or wife display traits acceptable to God? How will children be raised? Will the unbeliever refuse to allow the children to accompany the believer to church services?

Does the unbeliever already mock or speak against Christ, the bible, or Christians? Can this person potentially allow you to slip from your path of righteousness and holiness? Lean not upon your own understanding, but seek guidance from the Holy Spirit and ask God to lead your steps to wisdom. Pay close attention and use spiritual discernment. Have discussions on the topic of how things will be handled in the marriage, in terms of your belief and dedication in Christ. If you see red flags, take warning. Remember to put Christ first in all things.

Are you in an abusive relationship?