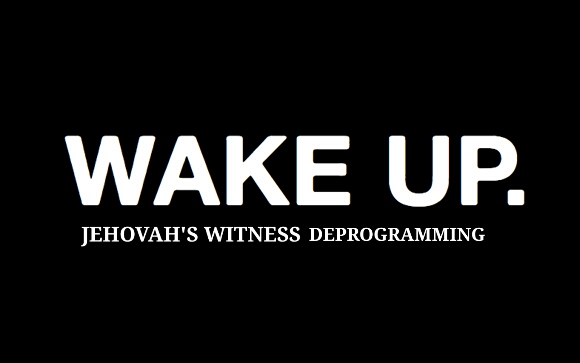 No cult talk, no cult language. This is a lesson on deprogramming, and key to understanding typical Jehovah’s Witness mind control, and how you may still be affected by the damage.

Jehovah’s Witnesses believe that the way to make a former JW (or, an apostate) return to the Watchtower organization is to abandon you, make you miss you, and you’ll hurt so badly that you’ll have no choice than to return so you can talk to them again. Read that again, and let it sink in a minute before proceeding. This is where your Jehovah’s Witness deprogramming starts.

A General Example of Mind Control in Every Day Life Situations

Think of a general example of a relationship where a man and woman become involved and one of them considers breaking up. Let’s pretend it’s the man who desires his space to clear his head from a past hurt. He backs away from the relationship. The woman believes in her mind that she may be able to get the man back. She purposely attempts to make the man wonder what she’s doing. She doesn’t receive the attention she wants, so she refuses to answer his casual messages, ignores him, and begins the manipulation. She may even post Facebook selfies trying to show she’s happy and out at a party, knowing he will see it, in order to make him fear losing her and regret backing away. Her ultimate plan is to make him crazy so he will run back and she will be in control again and feel the emotions she is comfortable and happy feeling. What she has really done is a form of manipulation, and even psychological game playing. Done enough times, this becomes emotional abuse. Likewise, when a man pretends to need space in order that he will get her attention, the same holds true. (Ignore them and they’ll want to come back.)

There are various ways people can cope with the reality that they were in a cult. Most importantly, if you are still suffering, then you are likely still a victim, unless you can begin to honestly identify the truth for what it really is. To see exactly what’s happening, you need to break it down in order to face the unavoidable reality. You were in a cult. You’re being affected by others who are still in that cult. Therefore, a sort of realization and cult deprogramming is required.

The following video is an excerpt from a Jehovah’s Witness talk, where a man who is under cultic influence himself, tells listeners that they should manipulate others in order that they get control. In fact, this is what he’s doing; manipulating them by using indirect threats which is a form of spiritual abuse. **In order to keep a straight focus and separate your emotion in this focused exercise, I ask you to please bypass the music and the message, fast forward to exactly 1 minute into the video, and pay close attention to the words being used by the speaker. You’ll be listening for implied threats, implied consequences that listeners may face if they don’t comply with the teaching, and false testimony. When done listening to the video, please return to complete the article.

Questions about the video, for review:

Jehovah’s Witnesses actually speak their own language which has been parroted by others. If you’ve been recently disfellowshipped or disassociated, keep in mind that the term ‘theocratic warfare’ is many times a device used to either deceive, hold back facts, or obtain control. “Loyalty to Jehovah” is an innocent bible based phrase. However, when used to manipulate in order to cause pain, it is being used as a weapon. By that I mean, Watchtower has taught your family members that if they associate with and keep talking to you, then they truly don’t love GOD, and they will die because of it. This is meant to frighten the listeners, just as the speaker was taught to be frightened. The listeners, though, nod in agreement, clap, and believe they are dutifully agreeing with a message of God. While the speaker is just parroting what he learned in a Watchtower, it is clear emotional abuse, yet the audience doesn’t realize it is happening.

“Apostates Are Not Shunned”

The “leave and you’re doomed” ultimatums are denied daily by JWs, yet they persist in doing exactly what they claim they don’t do; Abandon and eliminate loved ones using manipulation which they were taught is bible based.

Click here to briefly read the article on JW.org stating that they do not shun.

See also that “shunning” is realistically implying that one turns their back on someone. However, threats of shunning is spiritual abuse, emotional abuse, and psychological abuse. If your children are indirectly taught by their grandparents that you don’t love God because you left JWs, when you state that you do in fact love God, then that is willful lying, and false testimony. Both are violations of the 10 Commandments.

If you must, write down on paper what the actions and situations you’re dealing with actually really equate to. In other words, detach emotionally for long enough that you’re able to see this for what it really is. For example:

Saying they can’t talk to you *unless* you become a Jehovah’s witness again = a form of religious discrimination.

Being denied a job or rental housing based on your apostasy = discrimination, a blatant violation of your Civil Rights.

Stating they’ll leave if you don’t do something specific is threat of abandonment, which is psychological abuse. (Intentionally meaning to cause you pain in order to provoke an action)

The list goes on. Begin to look at the reality of what this really is. You’re a victim of a cult and as long as you are being abandoned, you continue to be a victim. However, you can choose not to be a victim by getting educated. Former Jehovah’s Witnesses are encouraged to take this study further and explore more aspects of cult behaviors by visiting and supporting the International Cultic Studies Association, and checking out the ICSA free articles and ebooks.

What to Do if Jehovah’s Witness Family Begins These Practices on You.

If you feel they’re trying to get you to miss them and come back by using threatening speech (ie: abandonment, death in Armageddon, guilt, etc), speak authoritatively, but respectfully. State exactly what they’re doing, and make sure you make them aware that you know what they’re doing. Sometimes, shock value may be warranted if they’re hearing, but not listening. An example would be in a case of a grandparent using grandchildren as pawns. You might say,  “While I realize you believe you have the right to parent my child while excluding me from visits, I have not asked that of you. I will allow the head of my house to lead my child [as the bible instructs] and I will hold firm on this. If you don’t understand, perhaps I can explain it in a different way.” If they then question your relationship with God or method of teaching, you can advise them, “Instruction is given in the bible as to how I’m to raise my child, and no particular religious affiliation is mentioned as a stipulation.”

If you are faced with a conversation about being shunned, you might say something like, “I realize you believe that your *religious leaders* (emphasize) think it’s best for you to abandon me in hopes that I’ll miss you so much that it causes me great pain so I’ll return to their religion, however I do not comply with this type of blatant, pain inflicting manipulation. I will also not be in any way manipulated and return to what I believe is a cult, even if you choose to believe that it’s not a cult.”

If grandparents attempt to enforce that children will be taken to meetings during visitations:

If you are threatened that a parent will leave you, or move away, you might state: “It’s a shame that you’ve allowed a group of 7 men to dictate that you’d be forced to abandon me due to my objections to their doctrines. This is proof in itself that you are being guided by men, and not by God.”

I won’t tell you every instance of what you should say, as that is up to you to discern when dealing with your loves ones. However, please keep in mind that it’s important that you emphatically address phrases such as “return to Jehovah”, which automatically categorize you as an atheist without warrant.

To those who have deduced that the organization was wrong and therefore God is wrong, please consider the following. In essence, you’re still in cultic thinking if you’re still equating the Jehovah’s Witnesses and Watchtower Society to God. Before you object, think about this. By stating God no longer exists after determining that JWs aren’t truth, you’re still possibly equating Watchtower to God. It is time to start seeing the reality, stop blaming God, and begin to see just how seriously you were falsely coerced into exactly what you’re now thinking….

Cult deprogramming does not just come by way of realizing that it is a cult, but more importantly, why it’s a cult, and how it affected you personally.

Characteristics of a Cult