Are You a Christian Addicted to Sin? Who Isn’t?

There is no question about it. The people of the world have become sucked into the news of hell on earth and blatantly addicted to sin. Bombs going off, scandal in the government, shootings and murders, violence, crime, political propaganda, media lies, and more. The more the better. To many, it has become second nature to awake, sign in to social media, and begin browsing until the most interesting piece of traumatic or outrageous criminal news stops the scrolling to deserve a click. No one cares much these days which cleaning products work best. They want jaw dropping information. They want to be shocked. They want to figure out angles. Debunk myths. Find chaos. They want the first chance to share the news with their 500 friends. “Can you believe this?!” has become the new “Good morning.”

The world is addicted to sin.

The Great Tempter Has Got You

Where is Satan at work? Everywhere. And more than ever. We are surrounded by filth. Look at the salesperson in the store who lies just to fill his pocket. You caught him. How dare him? Now you’re angry. You curse him to your friend after you leave.

Look at the rebel studying the next firearm he’s saving up for to “protect” his family. If anyone comes in the door, he imagines himself pulling the trigger and shooting him dead. He becomes obsessed with watching videos of gun reviews. He starts reading forums, joining in on the commentaries of how fast it fires, and how deadly it’s power. The bible sits and collects dust on his shelf.

Look at the man trying out for the leading role in a demonic TV show. All he has to do is be the most convincing that he can act far more evil than anyone else and he can make a fortune.

Look at the girl who has decided to turn against God in favor of the party life.  She does not need Jesus. She needs a man with money. Maybe this pair of shoes will attract him. She can make him hers.

Look at the hundreds of people screaming homosexuality in the streets, cursing Christians who dare disagree with their “rights” to have sex with their own gender. Look at the man applying makeup to his face on youtube, cursing at anyone who dare challenge his “right” to save up to pay a doctor to remove his body parts with a knife. Anyone who disagrees will be called “phobic”, and shunned. In fact, he’s planning a protest. It’ll make headlines. He will scream for his rights and get his friends to join in. 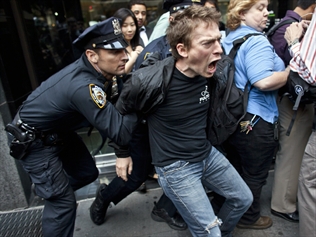 Look at the world around you. You’re right in the middle of it. It surrounds you no matter where you look. And it’s fun to watch. You know it, because you can’t seem to turn the channel or get off the website. You are addicted to sin.

Mark 14:38 “Keep watching and praying that you may not come into temptation; the spirit is willing, but the flesh is weak.”

We watch sin on the news. We watch it in our favorite show. We enjoy it. We can’t wait for it. It is like a drug. Being addicted to sin isn’t something we shout from the rooftops. We’d rather point out the sins of others. Right after we order the mob series off Amazon.

Think about what you plan to do tonight. Is Satan part of it? TV show? Bar? Violent video game? Watching protest violence? When you’re addicted to sin, it comes in all ways, including watching it take place.  Are you looking forward to it? If you’ve been getting closer to the Lord lately, you might say, “Not me!” as you immerse yourself in your newfound fun eschatology study. If you’ve been dabbling a bit, you may have a prick to the conscience. Either way, we must all take time to look at what we have allowed to occupy us, identify us, and utterly absorb us. We have to check ourselves for error and set the wheels in motion to somehow break free from being so addicted to sin.

Romans 6:1-2 What shall we say then? Are we to continue in sin so that grace may increase? May it never be! How shall we who died to sin still live in it?

The Only Way to Stop Addiction to Sin

Putting away addiction to sin can only be accomplished through the assistance of the Holy Spirit. When you recognize your sin, you know it is yours. You own it. Take comfort in knowing that your sin is equal to the man next door, but don’t be so quick to relax about it. Willful sin can bring God’s discipline. No one anywhere is without sin. However, people everywhere do hold a responsibility to recognize it, and honor God enough to want it gone.
Romans 6:11 Even so consider yourselves to be dead to sin, but alive to God in Christ Jesus.

When one begins to change their nature, that is evidence that the Lord is working in their lives. We owe it to the Christ as our Risen Savior to obey out of honor and wholehearted love for Him, ask Him to continue to walk beside us, and keep our paths away from temptation and addiction to sin. While not at all easy in this world of abominations and rejection of God, the Spirit does have the power to guide us so that we can be led into upcoming days of a more righteous, holy, and fulfilling life in Christ. There is hope, and we can be forgiven.